There Is No Income Tax in 9 States 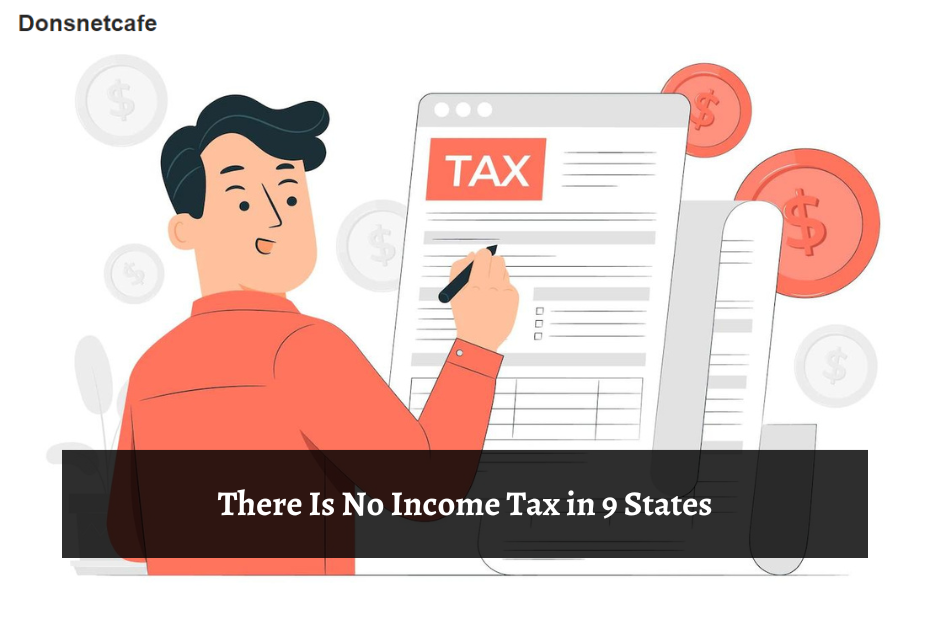 Everyone wants to pay less tax. Living in a state with no income tax could be one way to do that. At the moment, there is no state income tax at all in Alaska, Florida, Nevada, South Dakota, Tennessee, Texas, and Wyoming.

Washington state taxes investment income and capital gains, but only for people who make a lot of money.

Tennessee used to tax investment and interest income, but as of January 1, 2021, the Hall income tax was no longer in effect.

New Hampshire taxes income from investments and interest, but they plan to stop doing this starting in 2023. By 2027, nine states will have no income tax because of this.

Total Tax Burden: 5.10%
There is no state income or sales tax in Alaska. The entire state and local tax burden on Alaskans, which includes income, property, sales, and excise taxes, is only 5.10 percent of personal income, the lowest of the 50 states.

All Alaskans receive an annual payment from the Alaska Permanent Fund Corp., which is comprised of mineral lease rental and royalty revenues and investment returns.

The high cost of living in Alaska is primarily attributable to the state’s isolation. Alaska imposes the second-highest beer tax in the US, at $1.07 per gallon, after only Tennessee.

Alaska has some of the nation’s highest and quickest-rising healthcare costs.

However, at $11,064 per capita in 2014, the most recent year for which the Centers for Medicare and Medicaid Services (CMS) Office of the Actuary provided information, it also spent the most, excluding the District of Columbia, on healthcare.

The American Society of Civil Engineers assigned Alaska’s infrastructure a rating of C- in 2017. (ASCE).

Total Tax Burden: 6.97%
This favorite snowbird state has a huge population of seniors and pleasant temps.

Florida’s sales and excise taxes are higher than the national average, but the state’s total tax burden is only 6.97%, the sixth-lowest in the nation.

Due to its above-average home prices, Florida ranks 31st for affordability.

Nonetheless, Florida ranked tenth in the nation. News & World Report’s ranking of the best states to live in.

At $9,645 per student in 2019, Florida was one of the states with the lowest school system expenditures.

In 2021, the ASCE graded Florida’s infrastructure as a C.

Six years ago, Florida obtained the same grade from the Education Law Center for its equitable distribution of state school money.

Total Tax Burden: 8.23%
Nevada is largely reliant on revenue from hefty sales taxes on everything from food to clothing, sin taxes on alcohol and gaming, and casino and hotel taxes.

This leads to a total tax burden of 8.23% of personal income, the second-highest on this list, for Nevadans. However, it still ranks 22 out of 50 states, which is a highly good position.

However, Nevada ranks at the bottom (41) in terms of affordability due to its high living and housing expenses.

The state ranks 37th in the United States. News & World Report’s ranking of the best states to live in.

In 2019, Nevada spent $9,344 per student on education, ranking fourth lowest in the western United States.

In 2019, the ASCE assigned Nevada a grade of C for its infrastructure, one year earlier.

In 2015, in addition to obtaining an F from the Education Law Center for the fairness of its state school budget distribution, Nevada was the worst state overall.

Nevada’s healthcare expenditures per capita in 2014 were $6,714, the lowest on this list and the fourth-lowest in the nation.

Total Tax Burden: 7.37%
South Dakota, like many states with no income tax, generates revenue from other forms of taxation, such as cigarette and alcohol taxes.

The home of the Lakota Sioux and the Black Hills has one of the highest sales tax and property tax rates in the country.

According to The Atlantic, the presence of numerous big credit card businesses in South Dakota, in addition to higher property and sales tax rates, helps to exempt the state’s people from income tax.

According to WalletHub, South Dakotans pay only 7.37 percent of their personal income in taxes, ranking the state seventh in terms of the total tax load.

The state ranks fourteenth in affordability and fifteenth in the nation. News & World Report selections of the “Best States.”

Although it spent more on education than other Midwestern states, it spent less per student in 2019 at $10,139.

In addition, the state received a failing score for its education funding distribution.

South Dakota has not received an official letter grade from the ASCE, despite the significant deterioration of its infrastructure, with 17% of bridges deemed structurally inadequate and 90% of dams having a high hazard risk.

Total Tax Burden: 8.19%
Personal income taxes are so abhorrent in the Lone Star State that they were explicitly prohibited in the state’s constitution.

However, because infrastructure and services must be paid for in some way, Texas relies on sales and excise tax revenue to cover the costs.

Additionally, property taxes are greater than in the majority of states, resulting in a total tax burden of 8.19% of personal income. Nonetheless, Texans have one of the lowest overall tax burdens in the United States, ranked 19th.

Texas ranks 22nd in the nation for affordability, but was ranked 31st by U.S. News & World Report’s ranking of “Best States to Live In.”

Texas spent $9,827 per student on education in 2019, placing it below average among the 17 Southern states, and scored a D for its school funding distribution in 2015.

The ASCE assigned it a grade of C for its infrastructure in 2021.

In 2014, Texas spent $6,998 per person on healthcare, the seventh-lowest amount in the United States.

A benefit of residing in a tax-free state is that the $10,000 limit on state and local tax (SALT) deductions imposed by the Tax Cuts and Jobs Act will likely have less of an effect on you than it does on residents of high-tax areas such as California and New York.

Total Tax Burden: 8.34%
Washington has a young population, with only 15.9% of individuals aged 65 or older, and a large number of significant businesses due to the absence of a state-mandated corporate income tax (note that high-income earners are subject to state capital gains tax).

Washington residents do pay significant sales and excise taxes, and gasoline costs more than in most other states. The state’s total tax burden ranks 26th out of 50, at 8.34%.

In terms of affordability, Washington ranks 44th due to living and housing expenses that are significantly more than normal.

This may not matter to some citizens, though, because their state was ranked by U.S. News & World Report as the greatest state to live in overall for the year 2021.

In contrast, at $14,223 per student, it spent more than most on education in 2019, despite receiving a C for its school funding distribution four years prior.

In 2019, the ASCE awarded Washington the same grade for its infrastructure.

Total Tax Burden: 6.14%
Wyoming, with an estimated six persons per square mile, is the second-least densely inhabited state, trailing only Alaska, which has approximately one person per square mile.

The state has the third lowest total tax burden, including property, income, sales, and excise taxes as a percentage of personal income, at 6.14 percent.

According to the Cowboy State Daily, Wyoming, like Alaska, taxes natural resources, particularly oil, to make up for the lack of a personal income tax. The state ranks 33rd in terms of affordability on a national scale, and 35th overall. News & World Report’s “Best States to Live In” ranking.

Wyoming had one of the highest per-pupil education expenditures in the western United States in 2019, second only to Alaska.

In 2015, it received an A for its school funding allocation, the highest mark on this list.

In comparison, Wyoming’s healthcare expenditures in 2014 were more moderate, at $8,320 per capita.

Although Wyoming has not yet been assigned an official letter grade for its infrastructure, the American Society of Civil Engineers (ASCE) has determined that 6.9% of its bridges are structurally poor and 99 of its dams have a high hazard potential.

Total Tax Burden: 5.74%
Prior to 2016, Tennessee taxed investment income, including the majority of interest and dividends, but not wages.

The 2016 legislation includes a plan to reduce taxes on unearned income by 1% annually until the tax is repealed at the beginning of 2021.

Tennessee imposes high sales taxes and the highest beer tax in the nation, at $1.29 a gallon, to make up for the deficit.

Tennessee anticipates that full implementation of the new legislation will attract retirees who rely substantially on investment income. The state’s total tax burden of 5.74 percent is the second lowest in the country.

In terms of affordability, Tennessee ranks seventeenth overall, and the U.S. News & World Report’s ranking of “Best States to Live In” puts it 29th.

At $9,868 per student in 2019, Tennessee was just ahead of Texas in terms of education spending in the southern United States.

It also did a better job of allocating school financing equally than Texas did in 2015, earning the Equality State a grade of C.

The state’s infrastructure has not yet gotten an official letter grade, however, the ASCE has noted that 4.4% of its bridges are structurally inadequate and 276 of its dams have a high hazard potential.

Total Tax Burden: 6.84%
New Hampshire taxes dividends and interest, but not earned income. The New Hampshire Senate voted for legislation eliminating the investment income tax by one percent each year over five years, with full implementation by 2027.

The state imposes excise taxes, including alcohol taxes, and its average property tax rate of 1.86 percent of property values is the third highest in the nation.

WalletHub reports that New Hampshire’s total tax burden is only 6.84%, ranking it seventh in the nation.

The state is fourth in the United States. News & World Report list of “Best States to Live In” and 38th for affordability in the nation.

Although New Hampshire spent more per student on education than any other state on this list in 2019, its expenditures were among the lowest in the northeastern United States.

In addition, the Education Law Center awarded it a D in 2015 for its school money distribution.

In 2014, its healthcare expenditures per capita of $9,589 ranked eighth in the nation.

Which Are the Tax-Free States?

Alaska, Florida, Nevada, New Hampshire, South Dakota, Tennessee, Texas, Washington, and Wyoming will be the only states without a state income tax as of 2022. Certain wealthy incomes are subject to a state capital gains tax in Washington.

Why Do States Charge a State Tax?

No comments to show.